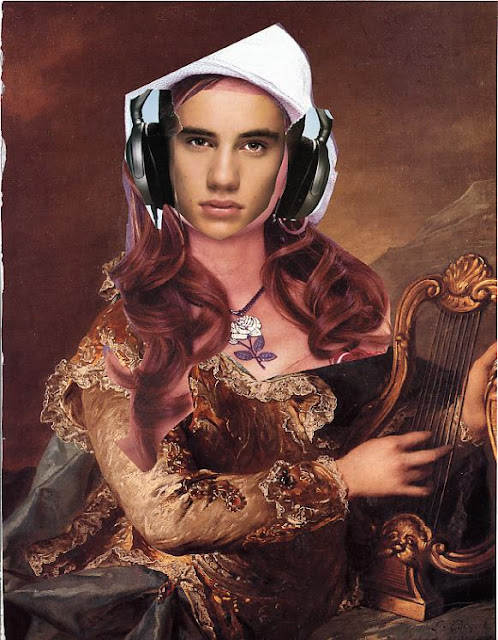 A Portfolio of Ten Collage Works by Berni Stephanus

When studying the figurative collage art of Berni Stephanus I wonder why I feel that I get it. The tenuous, fleeting relationships seen in the work seem almost past the breaking point in terms of their disjunction. There is the suggestion to look at these works like old master paintings since very often there are glossy reproductions of masterworks in the background or body parts of familiar paintings in the constructed figures.
However, the Cubist techniques used, of shifts in spatial scale and angles of perspective, are often so exaggerated that perhaps too much is being expected of the viewer to make the leaps of understanding required to assimilate the image presented in these seemingly piecemeal compositions. A pair of lips where an entire head should be, an amputated head with a gaping mouth wrapped around a woman’s posterior as if to be part of her beach clothing, an arm protruding from a hip, suspended belief is shaken. But still, we DO get it, the parts have an immediate recognition of gestalt that doesn’t seem like it should be there. We are left wondering why.
The gestural, spontaneous quality of the work suggests that these are perhaps studies for more finished works to be accomplished later on canvas giving a feeling of freedom of expression that many collage artists seem to lose in the quest for a well crafted and finished work. Thinking of these as preparatory works helps us to dismiss Stephanus’s casual, free wheeling antics as impulsive image hunting but still there is something more. They succeed too well far too often to be merely studies and experiments that might as easily be thrown out as kept.
Then I consider the precedents of film and I recall movies where close ups of lips or eyes, sounds, music, flashes of other angles, other moments in time, in rapid succession yield a similar wholeness but move so swiftly that you don’t have time to consider it. Films move so fast and continuously that they can’t be studied. Yet, in the memory, there are these raw impressions fed to the mind that are converted into an experience.
That is what is found in Stephanus’s collages; a series of focal impressions gathered together as our eye moves around the compositions. This is what makes these works poetic, the accumulation of focused experiences that gather in our mind as we read the image. Stephanus clearly understands the unfoldment of the image in the mind’s eye. We gradually acquire the image through our gaining an understanding of the relationships of the parts to one another and to the whole.

His keen eye knows what we will read in the work like Bach knows the edges of what the listener will hear as order or chaos in his fugues and inventions. At times Stephanus’s collages are deceptively simple like a Duchampian ready made. The elegance of design in some of the less complex works is captivating.

Stephanus doesn’t spoon feed us the images like babies who need predigested and highly refined mush. He offers raw experience restated like a clever insider joke in a conversation between old and sophisticated friends. This rawness is evidenced by Stephanus’s gestural style of scissor snipped bits of paper pasted quickly into place to capture a fleeting insight.
The result is a delightful combination of surprising and often challenging compositions that exude confidence, a fine sense of humor and a love for a dada-like irreverent and open eyed exploration and commentary on daily life in the modern world.
It is with great pleasure that we present this portfolio of ten works generously donated by the artist to the collage museum.